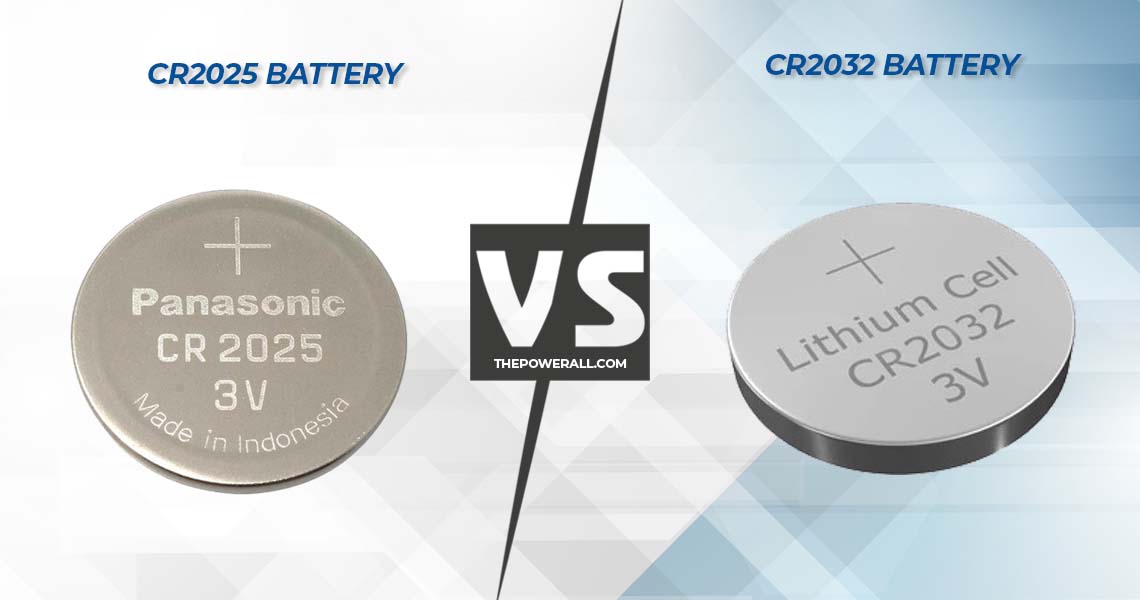 Choosing the right battery for certain electronic devices is one of the most frequently asked questions by consumers, especially when it comes to the CR2025 vs CR2032. This is because these batteries come with many similar characteristics.

Even though all batteries have similar functions, there are some obvious differences that you need to keep in mind when shopping.

After reading, we hope that you will better understand the differences and similarities between the CR2025 vs CR2032 battery. Most importantly, we will give you our final review of which battery is better and why at the end of the article.

So, let’s get started now!

Difference Between The CR2025 Vs CR2032 Battery

Did you know that the name of the battery is the first difference between CR2025 and CR2032?

Chemistry is indicated by the letter “C” in the name. The circle and the coin are referred to by the letter “R.” The International Electrotechnical Commission has issued these rules (IEC).

The  CR2025 is a lithium primary, non-rechargeable coin cell battery that is 20 mm in diameter and 2.5 mm thick. It is 3V high voltage, and depending on the manufacturer’s specifications, the capacity can be up to 170mAh.

Compared with items using CR2032, the CR2025 is very easy to buy because it is less expensive. These batteries’ low capacity and long lifespan account for their low cost. Since it only weighs 2.6 grams, these batteries are relatively lightweight.

CR2025 is somewhat more suitable when used in places with less installation space due to its lower thickness. On the other hand, when used in the same applications, the lower capacity (mAh) of the CR2025 will lead to a slightly shorter lifespan than the CR2032.

Since CR2025 batteries are sometimes used in most car keys, they can last only about 3 or 4 years before needing to be replaced. The battery life for a more power-hungry gadget will be a lot shorter. For example, the battery life in an IoT tracker that enables real-time object tracking is only about a year.

This slightly shorter service life can be attributed to the smaller CR2025 capacity.

Ideally, the CR2025 should be manufactured with high-quality materials and kept dry. When properly stored, our lithium coin batteries have a shelf life of up to 8 or 10 years.

Similar to the CR2032, the CR2025  is a very popular lithium coin cell battery used in similar quantities and for equivalent purposes.

The CR2025 has the outstanding feature of being more suitable and practical to use for goods with low current production needs. These goods range from pet collars to games, toys, calculators, etc. The amount of current required for these goods is fully supplied by this CR2025 battery.

The CR2032 battery is a coin cell or a primary lithium “button” measuring 20mm in diameter and 3.2mm thick, which is non-rechargeable. It weighs around 3.0 grams, comparatively heavier than the others.

Depending on the manufacturer’s requirements, the CR2032 battery has a voltage of 3 volts and a capacity of up to 240 mAh.

These CR2032 batteries are more powerful and have a relatively extended lifespan due to their large 235 mAh battery capacity. However, its cost is a bit high. Since it’s more advanced and has incredible power, brightness, and power, it is more expensive than the CR2025.

CR2032 batteries are an excellent choice for many applications due to their small size, relatively large capacity, long life, and stable discharge capacity.

The application will have a great influence on the service life. It is rare to use CR2032 batteries for car keys, but they can last up to 4 or 5 years without replacement. Some more power-hungry devices, like the Apple Air Tag, force the battery to work continuously to track the subject, giving the CR2032 a life span of just one year.

The CR2032 lithium coin cell battery is currently used in many commercial applications, including motherboards, security system boards, and weapon aiming systems. In addition, the CR2032 can be equipped with connection tabs that allow the battery to be inserted in any required position.

Strong goods, such as LED lights, hearing aids, screen scanners, etc., are more suitable for CR2032 batteries with a high capacity of 235 mAh.

What Characteristics Do CR2032 And CR2025 Have In Common?

Both CR2032 and CR2025 are 3V lithium button or coin batteries with a diameter of 20mm. They all share the same chemistry, voltage, and diameter regarding technology.

If kept under similar storage circumstances, CR2025 and CR2032-sized batteries from the same manufacturer will usually have the same shelf life.

As they are two of the most commonly used batteries globally, most giant battery brands, including Maxell, Duracell, Panasonic, Energizer, Philips, Murata (Sony), Renata, and others, integrate both CR2025 and CR2032 and CR2025 in their product portfolio.

Are The CR32 And CR2025 Batteries Interchangeable?

The CR2032 can be used instead of the CR2025 and vice versa as long as they fit in each other’s compartment, even though the CR2032 will probably last a bit longer because it has a larger capacity (mAh).

Tips: You can take a piece of aluminum foil and fold it up or another lead to fit the extra 0.7mm clearance if you find the use of CR2025 difficult. Close the battery compartment after placing it on top of the battery’s positive (+) connector to keep it stay put. If you do not make sufficient contact between the battery and spring, your battery may continue to die or work intermittently.

This is not ideal as CR2025 batteries cannot last long in CR2032-compatible equipment. However, using the CR2025 as a CR2032 battery replacement is still a possibility only in emergency cases.

The shape or structure of CR2025 vs CR2032 battery is the same as the buttons. The two different types of batteries also share similar characteristics, such as both batteries having a diameter of 20mm and a voltage of 3V.

Despite the CR2025 and CR2032 battery equivalents, they still differ on several points. It includes weight, thickness, durability, capacity, price, and others. In addition, each battery is also mainly used in various products.

From the above data, we can deduce that CR2032 batteries are generally superior to CR2025 batteries because they have a larger capacity and a longer lifespan.