Is Red Positive Or Negative On A Car Battery? – Jumper cable colors Basic knowledge regarding car systems and components, such as batteries, is essential for car owners in order to prolong the car.

However, this knowledge seems difficult to understand and remember for many people. For example, they might wonder whether black is positive or negative or what color is positive on a battery when facing the jumper cable colors. Spend a couple of minutes to read this blog now

It would help if you arm yourself with this knowledge because there may be emergencies that you need, but there is no way for you to look it up. So this article about red positive or negative on a car battery will help you in this regard.

Suppose you are confused about car battery positive and negative. The good news is that usually, they will only have two colors, black and red, on the plug cable.

Now, all you need to do is remember which color corresponds to which pole on the car battery. Follow the information below:

So, the big question: Is red positive or negative?

“The answer is that red corresponds to positive in almost all cases on car batteries.”

You will often find a protective cap on the battery. It is responsible for protecting car batteries from accidental shorting. The cap is usually in the position of the positive battery terminal and is either red or black but is accompanied by a (+) symbol instead.

However, that cap is not always there. So identifying the positive by trying to find that cap seems hopeless at times. Instead, rely on the symbol reported on the battery protection cover as they will have a (-) or (+) sign.

Car battery cables are usually also red, but not always. To reduce the risk of confusion, look for the (-) symbol for the cathode and (+) for the anode instead of just looking at the colors.

But as mentioned above, although the negative cable of a car battery will be black color in most cases, it is not always easy to distinguish by color alone.

Sometimes you will find black also in the positive cable. The best way to tell if it is a positive or negative battery cable is to find the (+) and (-) symbols on the battery cover.

Damaged batteries might be the main cause of your failure to start the vehicle’s engine. But let’s take a closer look. If a light is on and the system is still working, you just need to take a moment to jumpstart the vehicle battery.

Follow these simple steps and your car will be up and running in no time:

Prepare a set of connecting cables which are available at auto parts stores. Next is another car that must have a good battery.

Park it next to the vehicle where you need to start the battery so that the distance between the two cars is close enough to allow the charging cable to be plugged in.

Prepare your protection. Wear protective gloves and goggles for safety.

Make sure that the two engines are turned off after parking is complete. Open the hood, or in some cases where the battery is in the trunk, open the trunk.

Now you can distinguish the positive and negative poles of both batteries.

From now, pay attention to handling with care because confusing the two poles can cause damage to the vehicle and even injure you. Note that it is also very dangerous if you let the ends of the cables touch each other.

Look for metal frames or metal bases on vehicles with batteries that require a jumpstart. Clip one end of the positive cable to the battery’s positive terminal.

This is where you connect the negative terminal to the chassis or metal floor of the stalled car. Do not clamp before reaching this step, or you will cause unforeseen danger.

Now, start the car with a good battery and wait a while. Wait one or two minutes before starting the one with a dead battery.

If it works, remove the cables in order:

If the car does not work, wait a moment before repeating the process of starting the two cars in turn.

After the battery is successfully started for the first time, immediately fully charge your vehicle’s battery.

So, Is red positive or negative on a car battery?” – Red corresponds to positive in almost all cases on car batteries.

We recommend also noticing the symbols marked on the battery. Do not confuse the two poles, and you should be able to start your car on its own next time the battery needs a jumpstart. Can A Car Battery Be Too Dead To Jump Start? Detailed Explanation Can A Bad Starter Solenoid Drain A Car Battery? – How To Tell It? How To Jump Start A Lawn Mower Battery – Detailed Steps Can A Car Battery Die While Driving? What’s The Main Reason? 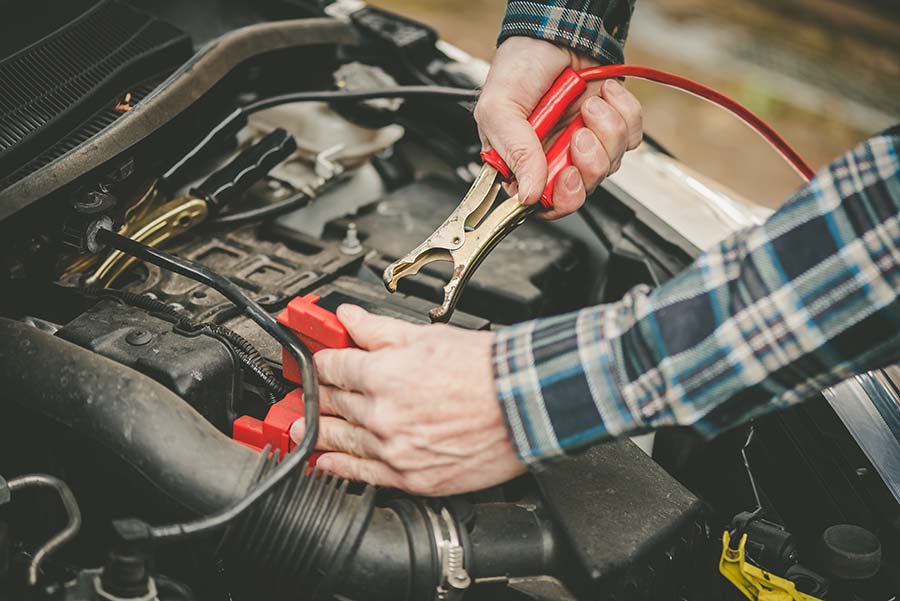 Car Won’t Start With Jump But Battery Is Good? How To Solve?

8 Common Signs Of A Bad Starter A Driver Should Know